Here is where you can probably guess my age by me telling you that I went to high school, graduated, got married and had two babies in the 60's. The penny candy stores (and I do mean penny) High school dances every month, riding through the fast food place and a carhop coming to the car, stopping after school at the local hang out for a "cherry coke" (I think they were a quarter) and putting a dime in the juke box, songs I could understand the words to, drive in movies were "in". Great TV, bell bottoms, and flower power. The peace marches. I thought weed was something that grew in your yard. It was pretty safe to walk at night.

They were exciting and turbulent all combined

The music holds special memories for those of us who grew up with it. You could understand the words, you could sing along with it, it was the music you fell in love with.

That falling in love music. Ok, I didn't dress like this all the time so we'll pretend it's the Prom

The Beatles
John, George, Ringo, and my favorite Paul

Hey Jude, Let it Be, All My Loving, I Saw Her Standing There, I Want to Hold Your Hand, Revolution, Love Me Do, Lucy in the Sky With Diamonds, And I Love Her, Eight Days a Week, All You Need is Love, Yesterday, Yellow Submarine, Roll Over Beethoven, Ticket to Ride, We Can Work it Out, With a Little Help From My Friends.

Just a Few of the songs I can think of off hand. The most popular group ever.

The Woodstock Music and Art Fair drew more than 450,000 people to a pasture in Sullivan County, New York. The music began Friday afternoon at 5:07pm August 15 and continued until mid-morning Monday August 18.

"One small step for man, one giant leap for mankind."

Neil Armstrong was the first man to step on the moon

A few of the TV shows I remember 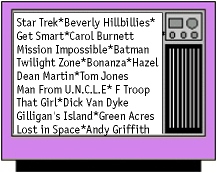 I thought about putting this part on with such happy music in the background, but this was also a part of the 60's. Part of those turbulent times we had along with the GREAT times of the

Send to a Friend

Alternative Send to a Friend